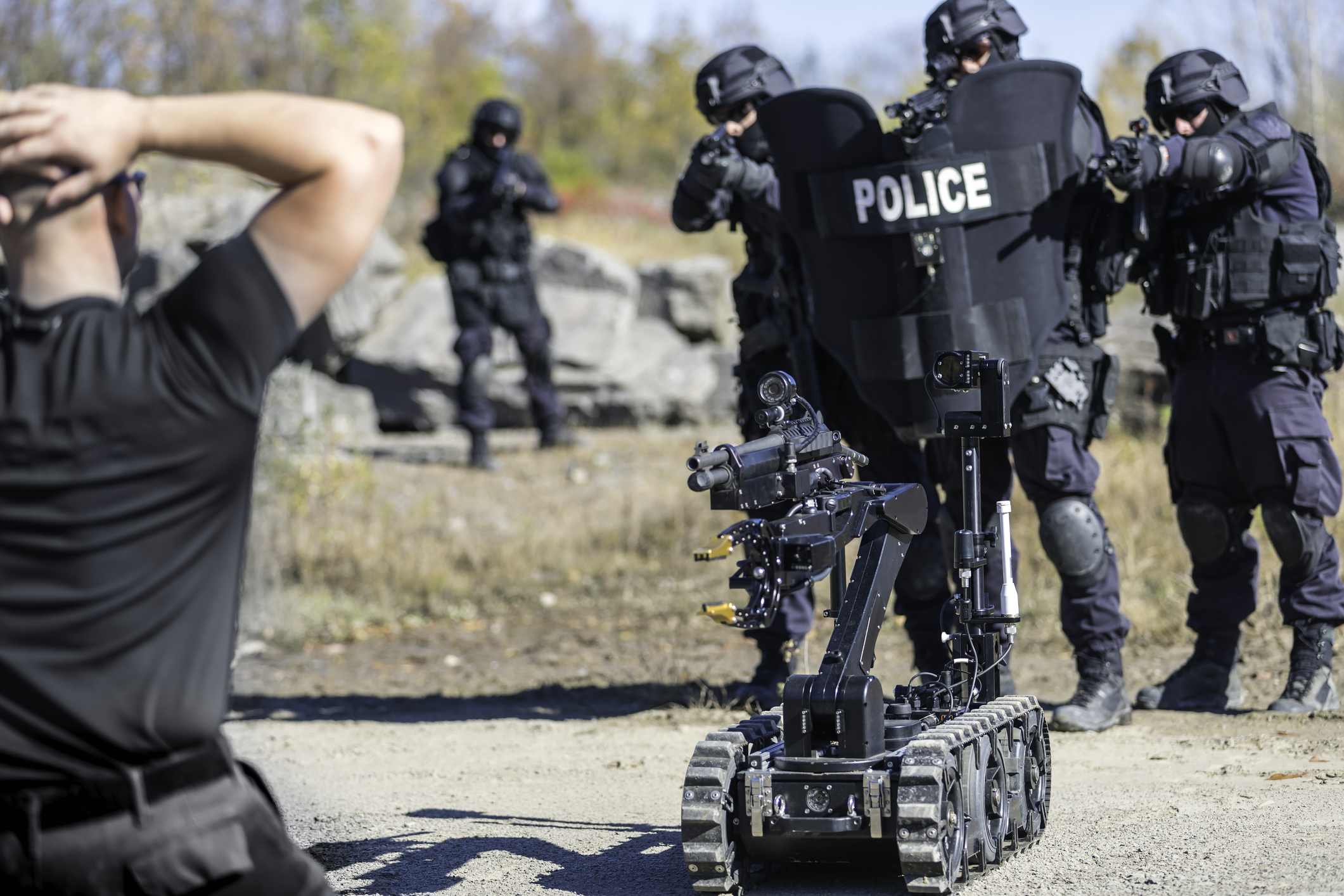 Not that long ago, robocops were the fictional stuff of violent, futuristic movies.

The first film, in 1987, involved a Detroit police officer killed in the line of duty and then transformed into a powerful cyborg called RoboCop, the bad guys’ worst nightmare. Two sequels, in 1990 and 1993, furthered the tale of the powerful robot who fights crime in a decaying city.

Now, the idea of robots performing law-enforcement duties — including the potential for deadly force — is no longer fiction.

When Police Have Used Robots

One of the first widely reported uses of a police robot was in 2013, when Boston Police employed them to apprehend Boston Marathon bomber Dzhokhar Tsarnaev as he hid under a boat tarp.

Three years later, Dallas Police became the first law enforcement agency to kill a suspect by using a robot. They packed a bomb disposal robot with explosives and sent it into a building where sniper Micah Xavier Johnson holed himself up in a standoff with police after opening fire on them. Police detonated the explosives, killing Johnson.

In 2020, New York Police acquired a four-legged “robotic dog,” which they touted as a tool that could save lives by going into places that are too dangerous to send officers.

There’s just one problem, however. The more people hear about the police use of robots, the more they fear what police might do with them. In New York, for instance, the police use of the robot dog in a public housing building prompted an outcry.

“At a time when we should be having more beat cops on the street, building relationships with residents, they’re actually headed in another direction in trying to replace them with robots,” said City Councilman Ben Kallos. Police responded to the pressure by terminating their lease contract for the dog with Boston Dynamics.

A similar scenario is now playing out in San Francisco.

On Nov. 30, the city’s board of supervisors voted 8-3 to adopt a draft policy giving police the ability to use robots with deadly force capabilities. The policy said that police would only use the robots “when risk of loss of life to members of the public or officers is imminent and outweighs any other force options available.” A police spokesperson further explained that police had no intention of arming the robots with guns, but instead envisioned the possibility of placing explosives on them “to contact, incapacitate, or disorient violent, armed, or dangerous suspects.”

Like New Yorkers, San Franciscans voiced skepticism and outright hostility. And on Dec. 6, the supervisors reversed themselves, tossing out the robot plan. But it might not be the final decision. The vote, which was unanimous, sent the measure to a committee for further review.

Police Robots and the Law

The opposition in both cities argues that the police robots’ threats to civil liberties outweigh their value as crime-fighting tools. They may or may not be right, but a closer look at the law that applies to policing and deadly force might be in order.

As a legal matter, the U.S. Constitution governs the use of deadly force by police. The particular weapons they use don’t change the constitutional calculus. It doesn’t matter whether a police officer uses a gun, a fist, or a robot. The legal assessment is about whether the suspect posed an imminent threat to others and whether the officer’s decision to use deadly force was warranted.

When it comes to robots, however, other legal issues may arise:

It is likely that police robots will become more common. As they do, we need to proceed with caution in deciding how to deploy them.