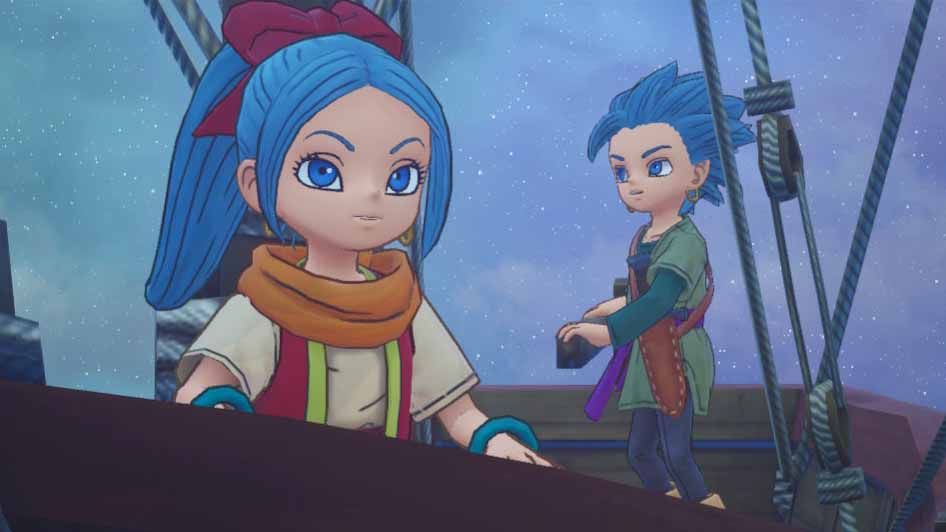 A few years ago, the popular Dragon Quest XI released on various platforms but didn’t come to Nintendo Switch until a few years later with the release of the Definitive Edition. Now things have turned around a bit with Dragon Quest Treasures releasing exclusively on Switch and no indication on whether it will come to other platforms in the future.

The story follows two children, Erik and Mia — siblings that were introduced in Dragon Quest XI S: Echoes of an Elusive Age. After freeing a mysterious flying pig and flying cat from the Viking ship they live on, the kids flee their Viking shipmates and soon discover a pair of magical Dragon Daggers that give them treasure hunting powers. Shortly thereafter they are tasked with finding the fabled Dragonstones that have some kind of connection with their mysterious cat and pig friends. To find these stones, they must explore five floating islands, acquire riches, recruit monsters to their gang, and contend with pirate rivals.

After roughly 30 hours, I was able to beat this spinoff and I can say that it is fun, but not necessarily what many Dragon Quest fans would expect since it’s very different from previous Dragon Quest games.

Disclaimer: This review was made possible by a review code provided by Square Enix. The company did not see the contents of the review before publishing.

Dragon Quest XI S is one of the very best JRPGs on Switch, but you shouldn’t expect the same exact experience with Treasures. This prequel spinoff feels both familiar and foreign since it seems to use many of the same character models from Echoes of an Elusive Age but also employs some very different mechanics. For instance, unlike mainline Dragon Quest games which employ turn-based combat, Dragon Quest Treasures uses real-time battles and requires a different type of strategizing as the main characters lead their recruited monster friends into battle.

Gameplay, and combat, and monster recruitment — Oh my!

Despite being a game about siblings, the two child protagonists don’t often go adventuring at the same time unless it’s part of story development. Initially, the game forces players to take turns playing solely as Erik or solely as Mia while setting up the plot. However, once a certain tutorial point is passed, players choose which character they want to use and usually go off exploring without the other sibling.

Erik and Mia offer the same skills and abilities so there is no advantage that one child has over the other. Think of it more like providing players with the choice to play as either a boy or a girl character that they can swap when they feel like it. It would have been interesting to see the siblings offer unique abilities, but having the choice of who to play as is a good aspect to the game regardless.

Mia and Erik can have up to three monsters in their party as they explore. There are a few commands that the siblings can give to their monster friends, but for the most part, these creatures fight alongside the protagonist on their own accord. If the team is high enough level over an enemy, Mia or Erik can stay back and don’t have to participate at all. However, most battles will go much quicker if the chosen protagonist leads the charge.

There are some very high-level enemies on every map. If you and your team manage to take them down, you’ll earn a lot of experience points. However, if you are defeated then any treasure you found between save points will be lost. This provides enough risk that you want to play carefully and not get too ahead of yourself. Then again, rushing into high-level areas could provide a bit of a challenge for those that want one.

After being defeated, some monsters might show up at Erik and Mia’s base hoping to be recruited. However, players can only add monsters to their team if they can afford to purchase them. Fortunately, there are items you can use to increase the chances of specific monsters wanting to get recruited. The monster battling and recruiting can take some time, but is enjoyable overall.

Rewards and exploration to get lost in

This adventure is very satisfying and lends itself to those who like to casually explore and loot. The more items players pick up while looking around, the more characters they can recruit and the more sidequests they can complete, so players can easily get lost running around and grabbing things rather than just fighting.

Additionally, each monster has an ability or “Forte” that they can use in the field to help Mia or Erik get around more easily. For instance, having a bat-like Dracky on the team allows Erik and Mia to glide while a Slime helps the siblings jump up to reach high cliffs. So having the right monsters on your team when exploring makes it possible for players to reach more areas.

Team members cannot be changed on the field as this is a function that can only be done back at the base. Sometimes you won’t have a suitable monster that you can use until much later. As you can imagine, this means that there are several secrets to uncover and places to revisit as time goes on and you acquire new monsters.

The Dragon Daggers allow Mia and Erik to locate buried treasure with the help of their monsters. These riches are worth different amounts and must be appraised back at the base to know their worth. The more treasure you have at your base, the more improvements it receives. For instance, you might be able to send more monsters out on missions to look for items or you might be able to open an item shop, which can help make your outings more successful. It’s rewarding seeing the base level up and makes the treasure-hunting part of the game worth it.

Additionally, the number of treasures you can carry at a time is determined by the kind of monsters in your party. If your party members faint on the field, you risk losing any treasure they were holding to an enemy monster. Not to mention that if you have several treasures on you, rival gangs will show up and try to take them from you. Players can regain dropped riches by defeating the offending opponent(s), reviving fallen teammates, and picking up the fallen goods.

However, taking the time to revive or pick up treasure leaves Mia or Erik exposed, so players need to make the area safe first or must take a calculated risk of exposing themselves in the hopes that they can grab the loot and get out of there unharmed. This setup provides just enough complexity to make treasure hunting a little more interesting without being too challenging or too dull.

Overall, I wasn’t very impressed with the plot. There are pirate rivals to contend with that have some unique designs, but their connection to the protagonists is weak and so they aren’t very interesting. Then there’s the mystery behind the twin daggers and the flying cat and pig that accompany Erik and Mia. All the elements of a fascinating fantasy story are there, however, the story doesn’t progress in such a way to really make you care about things as they develop.

Of course, this might be by design since this is supposed to be a more casual game. However, plot is usually very centric in JRPGs, so not having anything interesting to really pull you into the story gives players less of a reason to keep coming back.

Irritating use of text

While not necessarily a huge part of gameplay, there were multiple times that I found myself getting irritated by the text formatting in the game as it was often clunky and amateurishly employed. For example, on the settings page the “Display and Camera” section cuts off the last “a” in “Camera” and only scrolls to reveal the rest of the word when you hover over it. This is mildly annoying since viewing these words without scrolling could be an easy fix if the developers used a different font size or a slightly different layout.

This scrolling text isn’t just used in the menu pages, but also with character dialogue options and makes it hard to tell exactly what it is you’re clicking on when interacting with certain NPCs. It really pulled me out of the game each time I came across a situation like this and mostly felt like an unnecessary irritant.

Dragon Quest Treasures: Should you buy it?

While not a challenging turn-based JRPG like we’re used to seeing from the Dragon Quest series, Treasures provides a more laid-back adventure for players to enjoy. It doesn’t take a lot of focus, so it’s a fun game to play while binge-watching your favorite shows. Additionally, the real-time battles help it stick out from the turn-based combat of the core series. While not the most complex game out there, it does provide some different strategizing methods as you fight alongside the monsters in your party.

There are goals and main quests for players to follow, but you can easily just get lost in exploration, recruiting new monsters, and treasure hunting rather than progressing the story along. Considering that the story is pretty weak, it’s good that the gameplay is so fun.