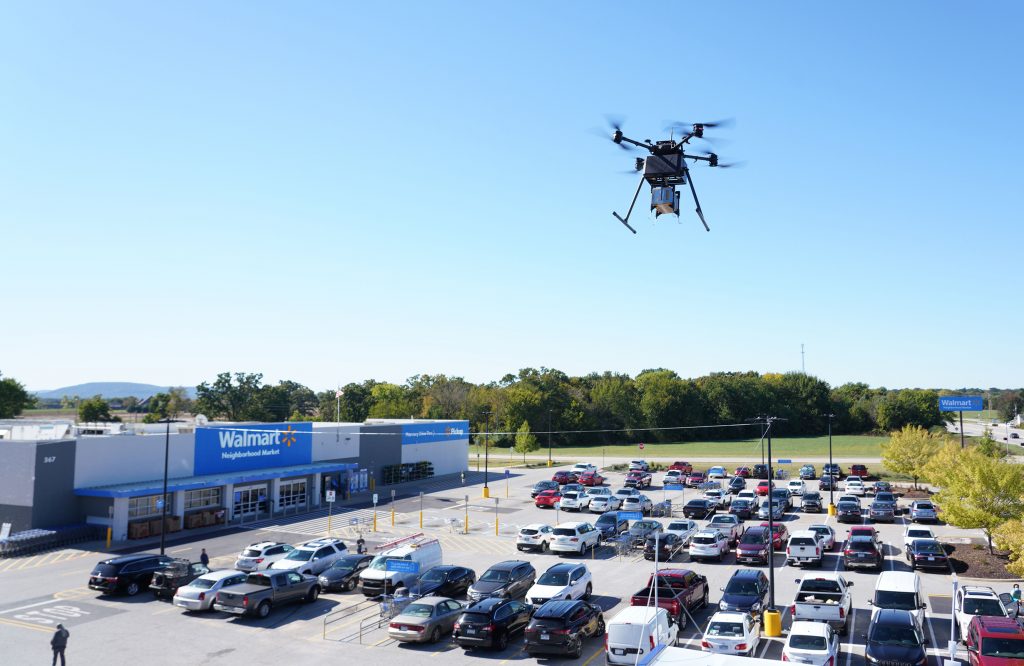 The news was first announced in May 2022 with a promise that operations would begin by the end of the year. With just a couple weeks to go before 2022 closes out, DroneUp’s delivery promise looks to be delivering. And now, 11 Walmart stores in the Dallas-area can deliver items to select customer homes.

If you live in one of those lucky locations, here’s how you can get a drone to bring Walmart products to your home:

2. Enter your address to ensure you live in an eligible location.

4. Checkout online just as you would with any standard online purchase, and pay the delivery fee of $3.99 (promo code FreeDeliveryTX waives your first delivery fee).

5. Wait for your order to arrive in your yard (it typically takes more than 30 minutes for it to arrive). The order is delivered using a cable that lowers the package into your yard, while the drone remains hovering in the air above.

How Texas became a hotspot for drone delivery

There’s Google-sibling Wing, which operates in Frisco, a suburb of the Dallas-Fort Worth metro area. Its operations, which launched in late 2021, deliver items from Walgreens, with drones based out of a small shipping container located at existing Walgreens stores. What’s unique about Wing’s operations is that Walgreens employees (rather than Wing personnel) are the ones processing and loading packages onto the delivery drones.

Then there’s Flytrex, which in early 2022 began delivering food from Chili’s Grill & Bar and Maggiano’s Little Italy to customer homes in Granbury, Texas, which is a small town just outside of Dallas-Fort Worth.

Dallas, Texas can also claim title to being the first major metro in the U.S. and the largest overall metro area to be participating in drone deliveries.

Drone delivery isn’t the only aspect of the industry thriving in Texas. Over in Plano, Texas, you’ll find the AT&T 5G Innovation Studio, where drones are in the spotlight in terms of 5G testing.

What’s next for DroneUp’s drone deliveries

Back in early 2022, DroneUp promised that it would operate in five other U.S. states besides Texas by the end of the year: Arizona, Arkansas, Florida, Utah and Virginia. DroneUp still says it’s on track to meet that goal, promising to make drone delivery available to 34 stores across 23 cities in those six states before 2022 closes out.

In fact, Arkansas is already up and running. The same week that DroneUp’s deliveries in Texas launched, DroneUp also began operations in Arizona and Florida. Utah is set to launch sometime next week.

DroneUp was founded in 2016 and is headquartered in Virginia Beach, Virginia. Most of its deliveries are done in partnership with Walmart — perhaps unsurprising given that the retail giant announced an investment of an undisclosed sum in DroneUp in June 2021.

Separately, Walmart has partnered with California-based Zipline to test drone deliveries with a select group of customers in Pea Ridge, Arkansas.