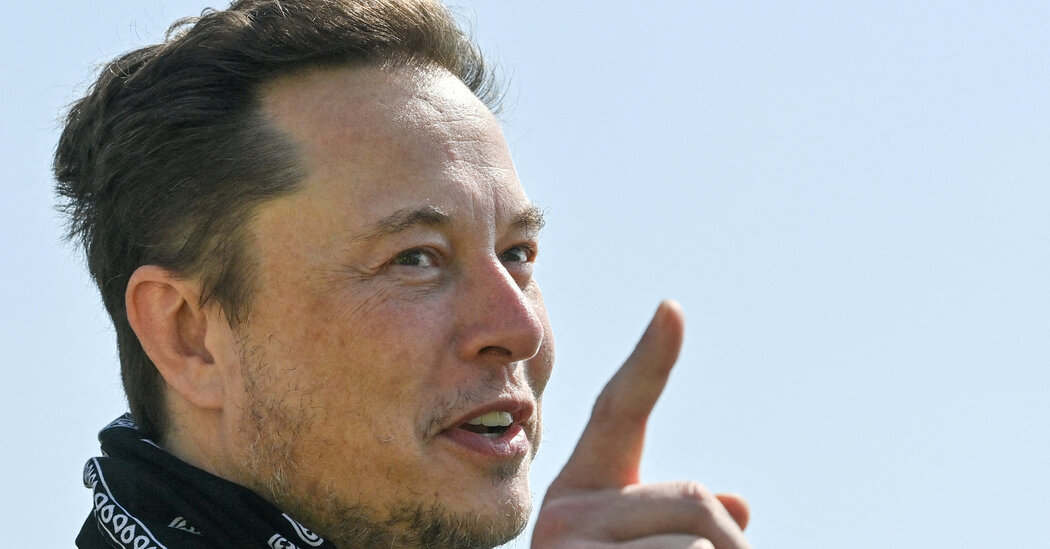 Why Elon Musk might be taking on Anthony Fauci

Since taking over Twitter, Elon Musk has shown a willingness, and sometimes a relish, to pick public fights with an array of targets, including advertisers, tech giants, employees and more.

But over the weekend, Musk publicly attacked two figures, Dr. Anthony Fauci and Yoel Roth, Twitter’s former head of trust and safety, in ways that may resonate with far-right audiences and gin up user engagement — but are likely to deter wary advertisers from flocking back to the social network anytime soon.

“My pronouns are Prosecute/Fauci,” Musk tweeted on Sunday, scoring points with both critics of the use of nonbinary pronouns and of Mr. Fauci, America’s top immunologist, who disagreed with President Donald Trump on how to reopen the country in 2020. Mr. Musk has previously criticized pandemic lockdowns, having defied one that affected Tesla’s factory in California, and remote work. (Mr. Fauci himself wrote in a Times Opinion guest essay how political divisiveness has hampered public health campaigns.)

Musk’s tweet drew predictable responses, including support from far-right figures like Representative Marjorie Taylor Greene of Georgia and rebukes from Democratic lawmakers like Senator Amy Klobuchar of Minnesota. Some on Twitter noted that Musk’s own predictions about the pandemic fell drastically short of reality.

Musk says that he has focused relentlessly on improving public safety on Twitter, and accused previous management of failing to do so. But Jack Dorsey, the company’s co-founder and former C.E.O., disputed that assertion. And three members of Twitter’s Trust & Safety Council announced their resignation last week, citing the company’s increased reliance on automated content moderation.

Is Musk banking on conservative engagement to help Twitter’s business? Musk has pointed to some metrics showing that user engagement is up since he took over. The billionaire may well be politically conservative, but evidence of his actual positions isn’t very clear. In any case, his actions — which also include leaking internal Twitter correspondence about topics like Hunter Biden to sympathetic journalists including Matt Taibbi and Bari Weiss — have certainly succeeded in winning over right-leaning users and conservative politicians.

But Mr. Musk’s shock tactics don’t seem to be designed to bring back advertisers who paused spending on Twitter amid the chaos during his takeover. (Apple, which was the target of a brief Musk campaign but which hasn’t halted ads on the platform, declined to comment to DealBook on Musk’s latest tweets.) That puts additional importance on Twitter’s efforts to expand revenue beyond ads, including the revamped Twitter Blue subscription service that is set to debut today.

Nor do they seem likely to endear the company to prospective recruits who may already be wary of workplace culture changes that Mr. Musk has wrought. Insider noted that employees had warned prospective hires via the anonymous employer-rating site Blind to stay away from the company and its “toxic” environment.

Microsoft buys a 4 percent stake in the London Stock Exchange Group. The American software giant acquired the stake from a group led by Thomson Reuters and Blackstone, as part of a $2.8 billion deal that will have the exchange rely on Microsoft’s cloud services. It follows similar business partnerships by other exchanges, including Nasdaq (with Amazon) and CME Group (with Alphabet).

Amgen agrees to buy Horizon Therapeutics for $27.8 billion. The all-cash deal for Horizon, which produces treatments for autoimmune diseases, is the biggest health care transaction of the year. In beating out rivals like Johnson & Johnson and Sanofi, Amgen is paying a nearly 20 percent premium to Horizon’s stock price on Friday.

European lawmakers grapple with a Qatar bribery scandal. Over the weekend, the Belgian authorities charged four people with corruption in connection with an investigation into suspected bribes by the Gulf state to current and former members of the European Parliament. The scandal comes as Qatar hosts the men’s soccer World Cup.

Britain prepares for national paralysis over strikes. The British government is drawing up contingency plans, including intervention by the military, to deal with work stoppages across a variety of sectors, including rail and nursing, through the end of the year. Union members have demanded higher wage increases to keep up with inflation.

December has been a downer for investors so far, and this morning is looking no different. Stock markets from Hong Kong to London are in the red on Monday, as are U.S. futures ahead of a big week of data releases and interest rates decisions.

Stocks in Hong Kong and Shanghai closed lower on Monday as concerns grow over the rate of Covid infections in major Chinese cities, after Beijing suddenly eased many of its zero-Covid restrictions. That is feeding into global slowdown fears, which are affecting energy prices. As of 7 a.m. Eastern, Brent crude was down roughly 0.7 percent.

The S&P 500 Index has fallen in nine of the past 11 trading sessions, as recession and inflation fears mount, pushing investors to pare their stock holdings. The benchmark index slumped 3.4 percent last week, its worst weekly performance since September, according to Deutsche Bank equities analysts.

Energy, bank and tech stocks have been hit particularly hard, with the Nasdaq composite index falling 4 percent so far this month.

Investors are bracing for another volatile week. Markets will be closely watching Tuesday’s latest Consumer Price Index report for signs that consumer inflation has peaked. And on Wednesday, the Fed will announce what is expected to be a 0.5 percentage point interest rate increase. That same afternoon, the Fed chair, Jay Powell, will deliver his latest assessment of the economy, and is expected to signal the central bank’s policy moves for next year.

It’s a similar picture in Europe. The European Central Bank and the Bank of England will also deliver rates decisions this week, and similarly sized increases are expected. And investors will be tracking consumer price data releases from France, Germany and the U.K., where soaring energy and food prices have pushed core inflation to multidecade highs.

As two congressional committees gear up to scrutinize the multibillion-dollar collapse of crypto empire FTX this week, its fallen founder, Sam Bankman-Fried, still seems to believe in the future of the company, and in his role as a business leader.

Mr. Bankman-Fried hopes to start a new venture, he told the BBC on Saturday, explaining that the goal would be to repay FTX investors. The comments were made a day after he weighed in on a proposal to revive FTX by issuing a new version of the exchange’s token, FTT, writing on Twitter that it would be “a productive path for parties to explore!” The price of FTT rose on his tweet, but the statements would have come as little consolation to FTX’s million creditors.

“I won’t be as helpful as I’d like,” Bankman-Fried warned. He is scheduled to testify on Tuesday before the House Financial Services Committee, but the former FTX chief executive said there were limits on what he would be able to say because he does not have access to all of his personal or professional data.

It’s not clear whether Mr. Bankman-Fried, who is known as S.B.F., will appear in person. He has also not yet accepted a request to talk to the Senate Banking Committee on Wednesday.

Staying silent may be difficult. The hearing will pit Mr. Bankman-Fried against John Ray, the restructuring expert and current FTX C.E.O. who is managing the bankruptcy and labeled FTX the worst case of corporate failure he had ever seen. S.B.F. has pushed back against that characterization, claiming Mr. Ray made “false” statements in court filings about FTX’s failure.

Mr. Ray reportedly met with Manhattan prosecutors last week. They are apparently looking into suspicious transfers to the Bahamas on the eve of FTX filing for bankruptcy, among other aspects of the collapse.

Other executives are being more circumspect. At least in public. Caroline Ellison, the former C.E.O. of Alameda Research, FTX’s sister trading firm that allegedly used FTX customer funds to back its very risky bets, has stayed quiet — even as Bankman-Fried has tried to shift blame on to her. Ms. Ellison has reportedly hired a former S.E.C. official steeped in crypto cases, Stephanie Avakian, as her lawyer. Last week, Ms. Ellison was reportedly spotted in a coffee shop not far from the offices of federal prosecutors in Manhattan, giving rise to speculation that she may be cooperating with their investigation.

Here’s what else is happening in crypto today:

“There’s a risk of a recession. But … it certainly isn’t, in my view, something that is necessary to bring inflation down.”

— Treasury Secretary Janet Yellen believes inflation will fall considerably in 2023. The less-good news: she acknowledges that a downturn in the U.S. economy is a possibility.

Three major central banks — the Fed, the European Central Bank and the Bank of England — will set interest rates this week. And there is fresh inflation data coming from the U.S. and Europe.

Tuesday: The U.S. and German consumer price index data for November come in, and the FIFA semifinals begin (Argentina vs. Croatia).

Wednesday: Wall Street analysts expect the Fed to raise interest rates by half of a percentage point, less than the three-quarters of a point hike it announced at its last four meetings. Elsewhere: Britain’s C.P.I. for November; and Inditex, the Spanish retailing group, reports quarterly results.

Thursday: The E.C.B. and B.O.E. are also expected to raise rates by half of a percentage point. Elsewhere: China reports industrial production and retail sales. U.S. retail sales for November are due. Adobe earnings.

Friday: Congress must reach a deal on funding the federal government beyond this week. Elsewhere: Accenture earnings.

Best of the rest

We’d like your feedback! Please email thoughts and suggestions to [email protected].