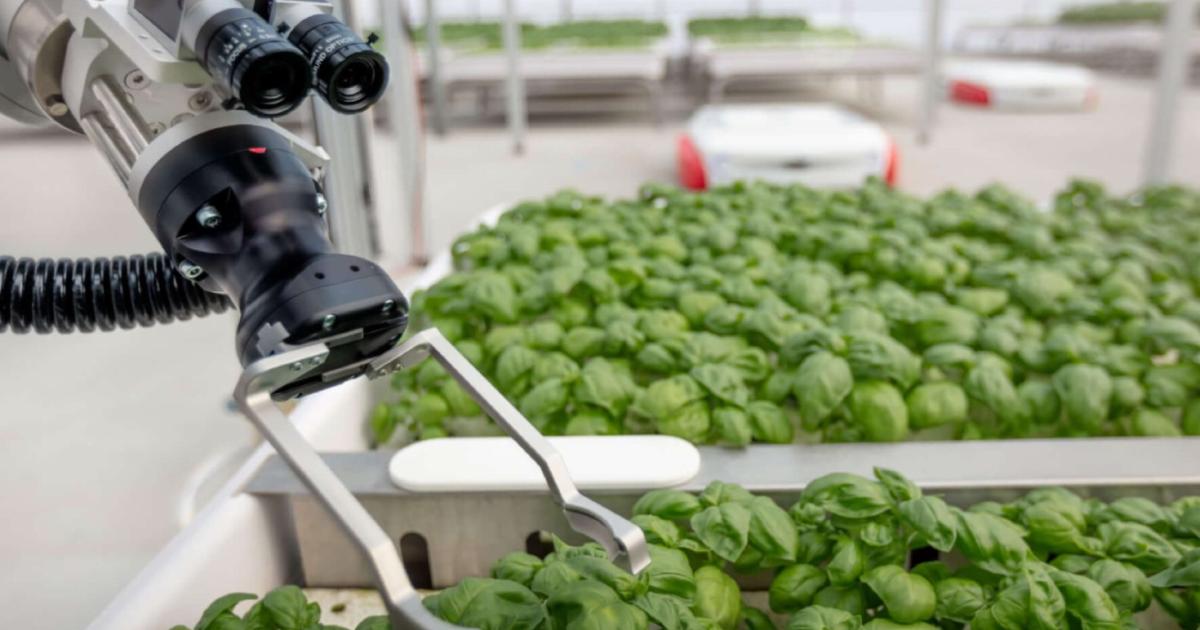 Cultivating a net zero emissions goal is core to the business models and missions of food startups Aleph Farms and Iron Ox. As each company pursues rapid individual growth, together they share collective aspirations to make widespread, positive environmental impacts in ways the food and agriculture establishment either can’t or won’t pursue.

What led these lean startups to bind themselves to net zero targets?

“This was inspired by when we arrived (at) COP 25 in Madrid three years ago and understood that this is where the world is going,” said Lee Recht, VP of sustainability at Aleph Farms, at the VERGE Net Zero virtual event early in December. Big corporations must pivot to reduce their carbon footprints in the next 10, 20 or 30 years, she explained, “so we decided to come with a different approach and build a company from inception at zero.”

Aleph Farms launched in 2017. In 2020, it became perhaps the first lab-grown meat startup to commit to reach net zero CO2 in five years within its operations, extending that goal to its supply chain by 2030. To get there, its three-step strategy focuses on energy efficiency and circularity in its operations and supply chains; sourcing or generating renewable energy; and using offsets or insets to address the remaining emissions.

In 2021, “net zero steak” maker Iron Ox joined with more than 8,300 businesses in the Race to Zero pledge through the United Nations Framework Convention on Climate Change (UNFCCC), committing to report annually on company efforts to halve carbon emissions by 2030 and eliminate them entirely by 2050.

With its robotics and massive greenhouses, Iron Ox has a bigger operational footprint than other farms. What sets its net zero roadmap apart? Ninety percent of its Scopes 1 and 2 emissions are energy-related, while Scope 3 emissions involve the cement, steel, polycarbonate and other elements of its buildings and robotics, according to Rebekah Moses, Iron Ox VP of impact strategy.

“These are things we can address,” she added. “And so, similarly, Scope 3 becomes basically a supply chain innovation issue. You have to work closely with architects, partnering maybe with… carbon capture cement manufacturers; design out everything that you can, things like steel.”

The startups are relatively lean; Aleph Farms has raised $119.4 million and Iron Ox $103.2 million, according to Crunchbase. They are far from the level of unicorns such as Impossible Foods, and farther still from publicly traded companies such as the young Beyond Meat or 156-year-old Nestlé.

When Aleph Farms set its net zero goal, it found that it wasn’t eligible to sign on to supportive frameworks such as the Race to Net Zero or Science-Based Targets initiative, because they require a polluting baseline.

“So this is something that kind of came to our surprise, and we’re really pushing forward now to find new frameworks that can push and support younger companies, startups that are not yet commercial but want to come out with that net zero approach, and really be part of that framework and that network and ecosystem to support them,” Recht said.

Moses noted that even though Iron Ex signed on to the UN’s Race to Net Zero, participation by a small, young company has limitations.

“The frustrating thing with that also is that you can wind up in this position where the frameworks are still kind of like permission to play, they get you a seat at the table,” she said. “And if they’re not built for you, you wind up missing out, I think, collectively on the… institutional knowledge that these disruptive startups bring.”

In addition, startups face a different reality from established corporations in that they are capital constrained and may lack purchasing power and revenue, Moses added. “There’s lots of ways this shows up for net zero.” Tax writeoffs on things such as solar installations aren’t clear cut, although, noted Moses, the new Inflation Reduction Act is making that easier.

“But big swings, things like capex investments for… onsite energy, those things might have to be creative because your options for financing it probably aren’t what they would be for a big [consumer packaged goods company],” Moses said. “So you just kind of have to start small in some cases, and then build as you can and be super, super agile.”

She described numerous benefits for early-stage, mission driven companies, including having a great story that attracts strategic partners and enjoying the flexibility of embedding deep decarbonization throughout the  business.

“You get to start close to zero, stay there with a dynamic baseline of some kind, but you don’t have to unlearn anything, and you don’t have to completely change your business model” to make a net zero commitment, unlike an oil or commodity meat producer, Moses said. In her view, such established companies may be either “kicking and screaming” into a commitment or “just kind of kicking a can down the road.”

“So I probably can’t find $5 million in the couch cushions on any given day,” Moses said. “But I don’t have to turn a ship 180 degrees to not destroy the planet. So that 180 is probably a bigger lift, honestly, than building to zero. And that’ll become even more and more apparent as we get these collective frameworks for our type of industry.”

What would help these startups advance along their net zero paths?

“It’s this combination of organizing ourselves, and being willing, as disruptive startups, to open source some of the good stuff happening internally,” Moses said. Sustainability should be considered table stakes for business, not just “a competitive advantage” as business schools often teach, she added.

Toward that end, Iron Ox has tried to open source its impact strategy through its life-cycle assessments, methodologies, academic papers and consumer toolkits, she said. And Iron Ox created a net zero roadmap for indoor farming after investors requested one, which the company seeks to release as a white paper in the next two quarters.

“Personally and professionally, I’ve really benefited from our community of disruptive startups and leaders like Lee, like other colleagues in the field, who are really generous with learnings,” Moses added.

Recht agreed that it matters to build an ecosystem of pre-competitive efforts to create sustainable companies. Each company has its intellectual property and technologies, but in the end material infrastructure is also required.

“You want to build a facility, you need steel and concrete, you need renewable energies, you need specific things that are not so unique to any other industry or any other company,” Recht said. “And this is something where you can look at it in a collective way and say, ‘Hey, we can support a full industry as we move forward.'”