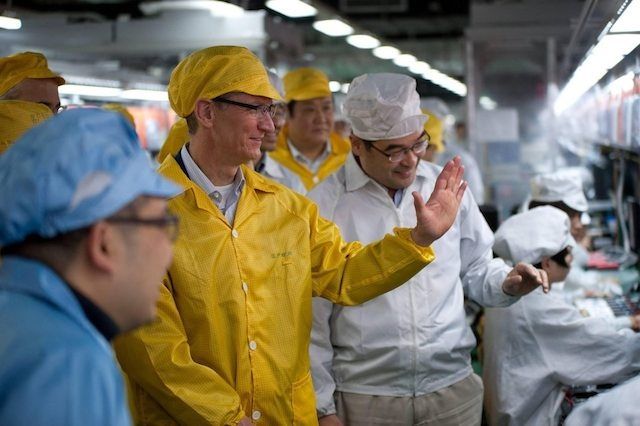 December 11, 2013: A Chinese labor rights group calls on Apple to investigate the deaths of several workers at a Shanghai factory run by iPhone manufacturer Pegatron.

Most controversially, one of the dead workers is just 15 years old. The underage worker reportedly succumbed to pneumonia after working extremely long hours on the iPhone 5c production line.

Poor working conditions inside Chinese factories came to light after Apple started its meteoric rise in the 2000s. Apple is far from the only tech company to have its products made in China. However, Cupertino’s high visibility, and propensity for casting itself as a “force for good” in tech, means critics often single out the company in this area.

Much of the time, the manufacturer named alongside Apple is supplier Foxconn. After a number of workers died at Foxconn factories, Apple faced heavy criticism in the media. Steve Jobs made things worse with comments that some construed as uncaring, such as telling interviewers that the factories were actually “pretty nice.”

The Pegatron story in 2013 showed that the problem extended beyond Foxconn. The 15-year-old worker who died, Shi Zhaokun, secured a job at a Pegatron factory using a fake ID. (The document stated his age as 20.) In his first month at the company, he reportedly broke overtime laws by working upward of 280 hours. He clocked 79 hours in his first week alone.

Apple later revealed that it sent a medical team to the Pegatron facility. The experts determined that working conditions did not lead to Shi’s death.

“Last month we sent independent medical experts from the U.S. and China to conduct an investigation of the factory,” Apple said in a statement. “While they have found no evidence of any link to working conditions there, we realize that is of little comfort to the families who have lost their loved ones. Apple has a long-standing commitment to providing a safe and healthy workplace for every worker in our supply chain, and we have a team working with Pegatron at their facility to ensure that conditions meet our high standards.”

Ongoing challenges for Apple in China

In the aftermath of the Pegatron accusations, the company began employing facial recognition technology to screen out underage workers. It also made sure that applicants for production line jobs had their government-issued IDs checked for authenticity. Workers’ faces got matched to their ID photos using AI-powered software.

Apple, meanwhile, ramped up efforts to make its supply chain more humane. As detailed in reports on worker conditions, Apple achieved around 95% compliance with enforcing a maximum 60-hour work week for people in its supply chain. The company also took other steps to reduce the hiring of underage workers.

In 2016, Apple CEO Tim Cook reportedly pledged to invest $275 billion in China to boost the country’s economy and “technological prowess.”

Apple works to lessen its reliance on China

At the same time, Apple added factories in India, Vietnam and other countries to lessen its reliance on China’s workforce. And Cupertino’s efforts to move manufacturing out of China seem to be accelerating.

It’s a big challenge, and one that Apple and its suppliers need to continue to address.