As telecom analysts, my TeleGeography colleagues and I have been busy attending conferences and gathering market intelligence from many of the most prominent telecom companies around the world.

Recently, our travels took us to São Paulo and Mexico City for the Futurecom and Mexico Connect 2022 conferences.

There’s a lot going on in both the Brazilian and Mexican markets, so let’s recap some of the discussion themes that stood out.

In 2022, that meant over 38 Tbps of international bandwidth for Brazil and more than 26 Tbps for Mexico.

At the same time, we see that IP transit prices in both countries are among the lowest in the region. This is largely due to factors like low transport costs and high competition.

Our latest findings suggest that those prices will continue to tumble. 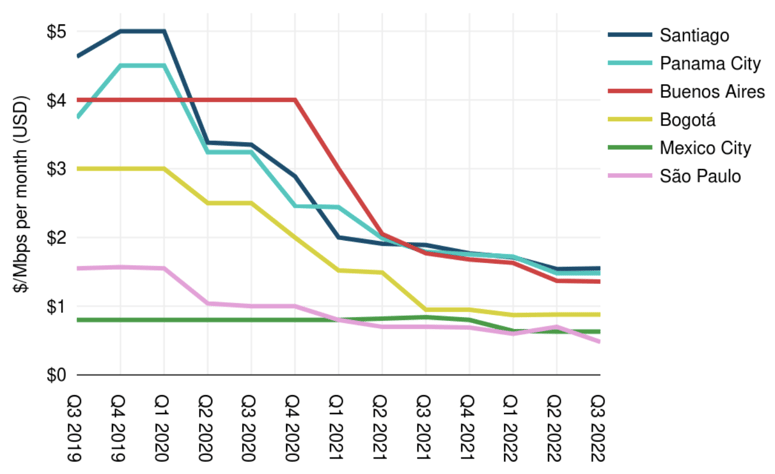 Our most recent data shows weighted median prices of $0.63 and $0.48, respectively, for a 10 GigE port in Mexico City and São Paulo. And many transactions are happening at even lower price points in both markets.

International connectivity to Mexico is largely defined by terrestrial routes between Mexico City and Dallas, but subsea cables also play an important role.

The wave of new cable projects coming to Mexico was one of the main talking points at Mexico Connect. This is notable because two older systems—Maya-1, ready for service (RFS) in 2000 and ARCOS, RFS 2001—have long dominated the Cancún-Florida route.

In addition to AMX-1, owned by incumbent América Móvil and put into operation in 2014, three new cable systems are on the way to eastern Mexico:

Carrier diversity has historically been limited on subsea routes between Cancún and the United States, but new cables could disrupt the market with increased competition and corresponding price erosion.

Connectivity to the U.S. Is Still Important

Recent cable launches like that of Malbec in 2021 demonstrate that there is appetite for intra-regional connectivity in Latin America.

However, requirements for capacity to the U.S. continue to dominate markets like Brazil. For carriers, this has become apparent as demand from Brazilian ISPs for transport to the U.S. has grown.

This is also evident in our Global Bandwidth Research Service where we estimate that international bandwidth to the U.S. has accounted for, on average, 84% of total Latin American capacity since 2017.

We estimate that international bandwidth to the U.S. has accounted for, on average, 84% of total Latin American capacity since 2017.

International bandwidth demand is steadily rising throughout Latin America. In larger markets like Brazil and Mexico, more focus is going toward filling network gaps to better connect more of the population to those international routes.

Several companies at both Futurecom and Mexico Connect commented that regions with traditionally less connectivity to the global internet—such as Amazonia—are now seeing more infrastructure investment. And terrestrial connectivity on routes like Mexico City (a dense metro area) to Querétaro (a data center hub) have become priorities as the telecom ecosystem swells in Mexico.