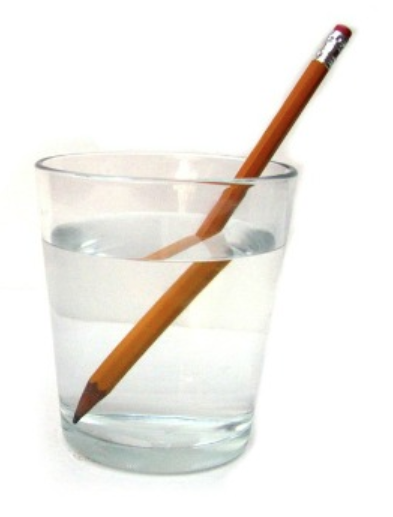 An excellent example of how metamaterials work comes from Stanford University [Ref. 1].  The concept can be described as creating nanoscale antenna to affect the performance of electromagnetic spectrum waves.  Over a half century ago, TVs had external metal antenna.  The design was for the frequencies of the various television stations.  If your reception was inadequate, changing the position of the antenna provided the opportunity to improve the signal being received.  Working with visible and infrared light, the wavelengths are roughly 1,000nm or less.  So, the work at modifying the light beam requires structures that are much smaller than the wavelength of the light.  Fortunately, there are semiconductor processes that are able to manufacture devices at a fraction of the wavelength.

The picture below is an example of a simple demonstration that the index of refraction of the water, which is different from that of air, creates the appearance of a displacement of the image of the pencil.  If one could create a liquid with a negative index, the pencil would be displaced in the opposite direction.

While the ability to create negative indices of refraction in liquids has not been reported, work is being done on solid materials that create the impact of a negative index.  The key to this “cloaking” device is a lenticular lens, which will be described in next month’s blog.

What the lenticular lens does is “bends” the light outward instead of either focusing or reflecting the light.  While this appears to be promising, there are still issues.  As with an existing, all the colors (frequencies) of light do not bend at the same amount.  This is compensated in optical lenses by using different shapes and materials to compensate for the different amount of bending of the light.  One example of the difference in various colors (frequencies) of light being bent differently is a rainbow.  The color separation is due to different amounts of bending the water particles have on sunlight.

There has been some work done on using pairs of either cell phones of iPads to create “holes” in objects/people since 2006 [Ref. 2].  The real issue is that while small “see-through” objects can be created to appear to see through an object, covering an entire, large object is not practical with this technique.

Science moves forward finding novel means to apply new technology as it is developed.  The application of lenticular lenses permits some very interesting situations.  The picture below shows only the head and shoulders of a person [Ref. 3].

If one observes the picture closely, there is a slight change in the coloring and texture, which is due to the “cloaking” device.  There has been considerable efforts in creating the “invisibility” or “stealth” material that works through a reasonable portion of both the visible and infrared spectrum.  Remember the rainbow example above.  If that were to happen to the light being “bent” around the object, it would be easy to determine the attempt at cloaking.

There is a material advertised as “Quantum Stealth” that has demonstrated a material that can “hide” large objects through light bending technology [Ref. 4].  There are videos of the performance of the material on their site.  While there have been examples of cloaking large objects since at least 2011 [Ref. 5], the ability to cover a wider spectrum of light has improved steadily.  Next month, how this metamaterial works and can be mass produced.

I have been involved in various aspects of nanotechnology since the late 1970s. My interest in promoting nano-safety began in 2006 and produced a white paper in 2007 explaining the four pillars of nano-safety. I am a technology futurist and is currently focused on nanoelectronics, single digit nanomaterials, and 3D printing at the nanoscale. My experience includes three startups, two of which I founded, 13 years at SEMATECH, where I was a Senior Fellow of the technical staff when I left, and 12 years at General Electric with nine of them on corporate staff. I have a Ph.D. from the University of Texas at Austin, an MBA from James Madison University, and a B.S. in Physics from the Illinois Institute of Technology.