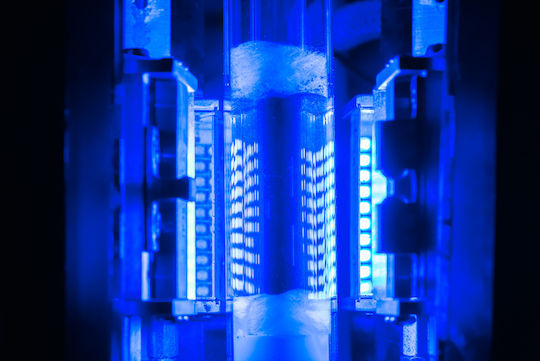 When a molecule emits a blink of light, it doesn’t expect it to ever come back. However researchers have now managed to place single molecules in such a tiny optical cavity that emitted photons, or particles of light, return to the molecule before they have properly left. The energy oscillates back and forth between light and molecule, resulting in a complete mixing of the two.

Previous attempts to mix molecules with light have been complex to produce and only achievable at very low temperatures, but the researchers, led by the University of Cambridge, have developed a method to produce these ‘half-light’ molecules at room temperature.

These unusual interactions of molecules with light provide new ways to manipulate the physical and chemical properties of matter, and could be used to process quantum information, aid in the understanding of complex processes at work in photosynthesis, or even manipulate the chemical bonds between atoms. The results are reported in the journal Nature.

To use single molecules in this way, the researchers had to reliably construct cavities only a billionth of a metre (one nanometre) across in order to trap light. They used the tiny gap between a gold nanoparticle and a mirror, and placed a coloured dye molecule inside.

“It’s like a hall of mirrors for a molecule, only spaced a hundred thousand times thinner than a human hair,” said Professor Jeremy Baumberg of the NanoPhotonics Centre at Cambridge’s Cavendish Laboratory, who led the research.

In order to achieve the molecule-light mixing, the dye molecules needed to be correctly positioned in the tiny gap. “Our molecules like to lie down flat on the gold, and it was really hard to persuade them to stand up straight,” said Rohit Chikkaraddy, lead author of the study.

To solve this, the team joined with a team of chemists at Cambridge led by Professor Oren Scherman to encapsulate the dyes in hollow barrel-shaped molecular cages called cucurbiturils, which are able to hold the dye molecules in the desired upright position.

When assembled together correctly, the molecule scattering spectrum splits into two separated quantum states which is the signature of this ‘mixing’. This spacing in colour corresponds to photons taking less than a trillionth of a second to come back to the molecule.

A key advance was to show strong mixing of light and matter was possible for single molecules even with large absorption of light in the metal and at room temperature. “Finding single-molecule signatures took months of data collection,” said Chikkaraddy.

The researchers were also able to observe steps in the colour spacing of the states corresponding to whether one, two, or three molecules were in the gap.

The Cambridge team collaborated with theorists Professor Ortwin Hess at the Blackett Laboratory, Imperial College London and Dr Edina Rosta at Kings College London to understand the confinement and interaction of light in such tiny gaps, matching experiments amazingly well.