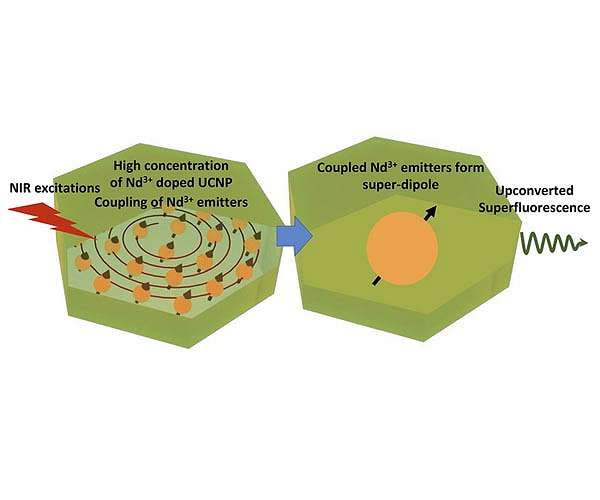 Researchers looking to synthesize a brighter and more stable nanoparticle for optical applications found that their creation instead exhibited a more surprising property: bursts of superfluorescence that occurred at both room temperature and regular intervals. The work could lead to the development of faster microchips, neurosensors, or materials for use in quantum computing applications, as well as a number of biological studies.

Superfluorescence occurs when atoms within a material synchronize and simultaneously emit a short but intense burst of light. The property is valuable for quantum optical applications, but extremely difficult to achieve at room temperatures and for intervals long enough to be useful.

The material in question – lanthanide-doped upconversion nanoparticle, or UCNP – was synthesized by the research team in an effort to create a “brighter” optical material. They produced hexagonal ceramic crystals ranging from 50 nanometers (nm) to 500 nm in size and began testing their lasing properties, which resulted in several impressive breakthroughs.

The researchers were initially looking for lasing, where light emitted from one atom stimulates another to emit more of the same light. However, they instead found superfluorescence, where first all the atoms align, then emit together.

“When we excited the material at different laser intensities, we found that it emits three pulses of superfluorescence at regular intervals for each excitation,” says Shuang Fang Lin, associate professor of physics at North Carolina State University and co-corresponding author of the research. “And the pulses don’t degrade – each pulse is 2 nanoseconds long. So not only does the UCNP exhibit superfluorescence at room temperatures, it does so in a way that can be controlled.”

Room temperature superfluorescence is hard to achieve because it is difficult for the atoms to emit together without being ‘kicked’ out of alignment by the surroundings. In a UCNP, however, the light comes from electron orbitals ‘buried’ beneath other electrons, which act as a shield and allow superfluorescence even at room temperature.

Additionally, UCNP’s superfluorescence is technologically exciting because it is anti-Stokes shifted, meaning that the emitted wavelengths of light are shorter and higher energy than the wavelengths that initiate the response.

“Such intense and rapid anti-Stokes shift superfluorescence emissions are perfect for numerous pioneering materials and nanomedicine platforms,” says Gang Han, professor of biochemistry and molecular biotechnology at University of Massachusetts Chan Medical School and co-corresponding author of the research. “For example, the UCNPs have been widely used in biological applications ranging from background noise-free biosensing, precision nanomedicine and deep-tissue imaging, to cell biology, visual physiology, and optogenetics.

“However, one challenge to current UCNP applications is their slow emission, which often makes detection complex and suboptimal. But the speed of anti-Stokes shift superfluoresence is a complete game changer: 10,000 times faster than the current method. We believe that this superfluorescence nanoparticle provides a revolutionary solution to bioimaging and phototherapies that await a clean, rapid and intensive light source.”

UCNP’s unique qualities could lead to its use in numerous applications.

“First, room temperature operation makes applications much easier,” Lim says. “And at 50 nm, this is the smallest superfluorescent media currently in existence. Since we can control the pulses, we could use these crystals as timers, neurosensors or transistors on microchips, for example. And bigger crystals could give us even better control over the pulses.” 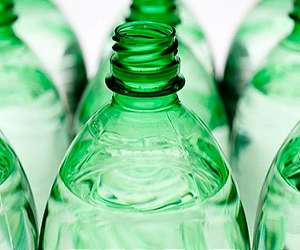 Making nanodiamonds out of bottle plastic


What goes on inside planets like Neptune and Uranus? To find out, an international team headed by the Helmholtz-Zentrum Dresden-Rossendorf (HZDR), the University of Rostock and France’s Ecole Polytechnique conducted a novel experiment. They fired a laser at a thin film of simple PET plastic and investigated what happened using intensive laser flashes.
One result was that the researchers were able to confirm their earlier thesis that it really does rain diamonds inside the ice giants at the periphe … read more