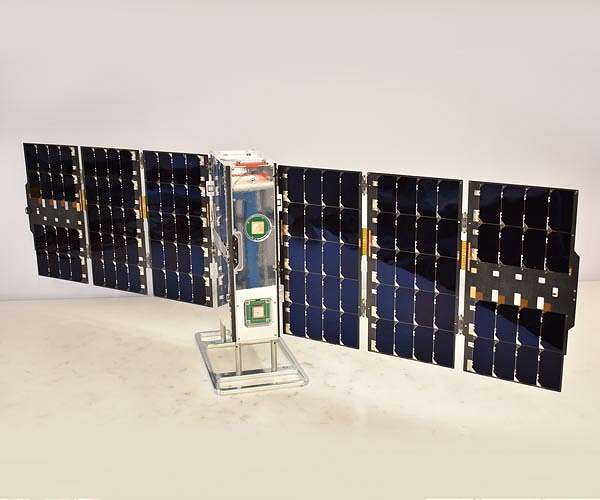 In May 2022, a SpaceX Falcon 9 rocket launched the Transporter-5 mission into orbit. The mission contained a collection of micro and nanosatellites from both industry and government, including one from MIT Lincoln Laboratory called the Agile MicroSat (AMS).

AMS’s primary mission is to test automated maneuvering capabilities in the tumultuous very low-Earth orbit (VLEO) environment, starting at 525 kilometers above the surface and lowering down. VLEO is a challenging location for satellites because the higher air density, coupled with variable space weather, causes increased and unpredictable drag that requires frequent maneuvers to maintain position. Using a commercial off-the-shelf electric-ion propulsion system and custom algorithms, AMS is testing how well it can execute automated navigation and control over an initial mission period of six months.

“AMS integrates electric propulsion and autonomous navigation and guidance control algorithms that push a lot of the operation of the thruster onto the spacecraft – somewhat like a self-driving car,” says Andrew Stimac, who is the principal investigator for the AMS program and the leader of the laboratory’s Integrated Systems and Concepts Group.

Stimac sees AMS as a kind of pathfinder mission for the field of small satellite autonomy. Autonomy is essential to support the growing number of small satellite launches for industry and science because it can reduce the cost and labor needed to maintain them, enable missions that call for quick and impromptu responses, and help to avoid collisions in an already-crowded sky.

AMS is the first-ever test of a nanosatellite with this type of automated maneuvering capability.

AMS uses an electric propulsion thruster that was selected to meet the size and power constraints of a nanosatellite while providing enough thrust and endurance to enable multiyear missions that operate in VLEO. The flight software, called the Bus Hosted Onboard Software Suite, was designed to autonomously operate the thruster to change the spacecraft’s orbit. Operators on the ground can give AMS a high-level command, such as to descend to and maintain a 300-kilometer orbit, and the software will schedule thruster burns to achieve that command autonomously, using measurements from the onboard GPS receiver as feedback. This experimental software is separate from the bus flight software, which allows AMS to safely test its novel algorithms without endangering the spacecraft.

“One of the enablers for AMS is the way in which we’ve created this software sandbox onboard the spacecraft,” says Robert Legge, who is another member of the AMS team. “We have our own hosted software that’s running on the primary flight computer, but it’s separate from the critical health and safety avionics software. Basically, you can view this as being a little development environment on the spacecraft where we can test out different algorithms.”

AMS has two secondary missions called Camera and Beacon. Camera’s mission is to take photos and short video clips of the Earth’s surface while AMS is in different low-Earth orbit positions.

“One of the things we’re hoping to demonstrate is the ability to respond to current events,” says Rebecca Keenan, who helped to prepare the Camera payload. “We could hear about something that happened, like a fire or flood, and then respond pretty quickly to maneuver the satellite to image it.”

Keenan and the rest of the AMS team are collaborating with the laboratory’s DisasterSat program, which aims to improve satellite image processing pipelines to help relief agencies respond to disasters more quickly. Small satellites that could schedule operations on-demand, rather than planning them months in advance before launch, could be a great asset to disaster response efforts.

The other payload, Beacon, is testing new adaptive optics capabilities for tracking fast-moving targets by sending laser light from the moving satellite to a ground station at the laboratory’s Haystack Observatory in Westford, Massachusetts. Enabling precise laser pointing from an agile satellite could aid many different types of space missions, such as communications and tracking space debris. It could also be used for emerging programs such as Breakthrough Starshot, which is developing a satellite that can accelerate to high speeds using a laser-propelled lightsail.

“As far as we know, this is the first on-orbit artificial guide star that has launched for a dedicated adaptive optics purpose,” says Lulu Liu, who worked on the Beacon payload. “Theoretically, the laser it carries can be maneuvered into position on other spacecraft to support a large number of science missions in different regions of the sky.”

The team developed Beacon with a strict budget and timeline and hope that its success will shorten the design and test loop of next-generation laser transmitter systems. “The idea is that we could have a number of these flying in the sky at once, and a ground system can point to one of them and get near-real-time feedback on its performance,” says Liu.

AMS weighs under 12 kilograms with 6U dimensions (23 x 11 x 36 centimeters). The bus was designed by Blue Canyon Technologies and the thruster was designed by Enpulsion GmbH.

Legge says that the AMS program was approached as an opportunity for Lincoln Laboratory to showcase its ability to conduct work in the space domain quickly and flexibly. Some major roadblocks to rapid development of new space technology have been long timelines, high costs, and the extremely low risk tolerance associated with traditional space programs. “We wanted to show that we can really do rapid prototyping and testing of space hardware and software on orbit at an affordable cost,” Legge says.

“AMS shows the value and fast time-to-orbit afforded by teaming with rapid space commercial partners for spacecraft core bus technologies and launch and ground segment operations, while allowing the laboratory to focus on innovative mission concepts, advanced components and payloads, and algorithms and processing software,” says Dan Cousins, who is the program manager for AMS. “The AMS team appreciates the support from the laboratory’s Technology Office for allowing us to showcase an effective operating model for rapid space programs.”

AMS took its first image on June 1, completed its thruster commissioning in July, and has begun to descend toward its target VLEO position. 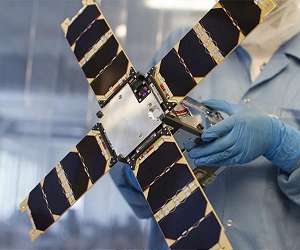 The future market for small satellites


The German federal government has launched the Small Satellite Initiative with the aim of consolidating the German space industry and supporting small and medium-sized enterprises (SMEs), especially start-ups, actively involved in the small satellite sector. The Bundestag allocated 10 million euros for this purpose in 2022. On 6 December 2022, representatives from industry, research and politics met in Berlin to discuss how the field of small satellites in Germany can form part of the framework of the g … read more