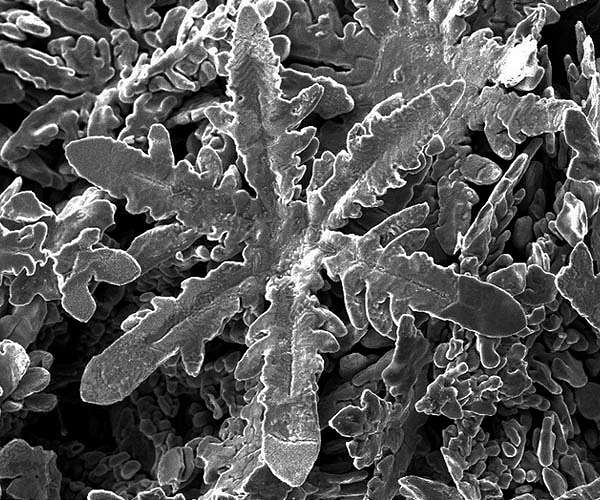 Scientists in New Zealand and Australia working at the level of atoms created something unexpected: tiny metallic snowflakes. Why’s that significant? Because coaxing individual atoms to cooperate in desired ways is leading to a revolution in engineering and technology via nanomaterials (And creating snowflakes is cool.)

Nanoscale structures can aid electronic manufacturing, make materials stronger yet lighter, or aid environmental clean-ups by binding to toxins. To create metallic nanocrystals, New Zealand and Australian scientists have been experimenting with gallium, a soft, silvery metal which is used in semiconductors and, unusually, liquifies at just above room temperature. Their results were just reported in the journal Science.

The Australian team worked in the lab with nickel, copper, zinc, tin, platinum, bismuth, silver and aluminium, growing metal crystals in a liquid solvent of gallium. Metals were dissolved in gallium at high temperatures. Once cooled, the metallic crystals emerged while the gallium remained liquid.

The New Zealand team, part of the MacDiarmid Institute for Advanced Materials and Nanotechnology, a national Centre of Research Excellence, carried out simulations of molecular dynamics to explain why differently shaped crystals emerge from different metals. (The government’s Marsden Fund supported the research.)

“What we are learning is that the structure of the liquid gallium is very important,” says Gaston. “That’s novel because we usually think of liquids as lacking structure or being only randomly structured.” Interactions between the atomistic structures of the different metals and the liquid gallium cause differently shaped crystals to emerge, the scientists showed.

The crystals included cubes, rods, hexagonal plates and the zinc snowflake shapes. The six-branched symmetry of zinc, with each atom surrounded by six neighbours at equivalent distances, accounts for the snowflake design. “In contrast to top-down approaches to forming nanostructure – by cutting away material – this bottom-up approaches relies on atoms self-assembling,” says Gaston.

“This is how nature makes nanoparticles, and is both less wasteful and much more precise than top-down methods.” She says the research has opened up a new, unexplored pathway for metallic nanostructures. “There’s also something very cool in creating a metallic snowflake!” 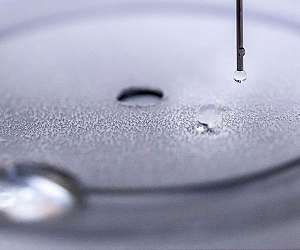 New approaches to the mystery of why ice is slippery


The surface of the ice melts in contact with a solid, forming a lubricant layer which is self-perpetuating, as greater weight and slippage are applied to it. This cooperative phenomenon makes the ice more slippery and more likely to cause skating or car accidents, according to international research led by the Complutense University of Madrid (UCM).

In this study, published in Proceedings of the National Academy of Science, the researchers conducted a computer simulation of how a solid slides over … read more