By studying lunar soil brought back by China’s Chang’e-5 probe, researchers found reliable evidence of disproportionation origin of nanophase iron on the moon, according to a study published on Nature Astronomy on Thursday.

The peer-reviewed study was conducted by the Institute of Geochemistry, Chinese Academy of Sciences, and the Kunming University of Science and Technology.

Researchers measured the valence states of iron in the microcraters on the sample, and found the presence of nanophase iron and associated Fe3+. The chemical composition of the residual impactor suggested that it was formed by a secondary low-velocity impact on lunar anorthite.

Researchers said in the study, as the whole process was dominated by impact events without the contribution from the solar wind, these findings inform them on weathering mechanisms on regions or bodies that do not experience a strong solar wind component, such as permanently shadowed areas or outer solar system bodies.

The Chang’e-5 probe returned to Earth on December 17, 2020, having retrieved 1,731 grams of lunar samples, mainly rocks and soil from the moon’s surface.

The samples have helped researchers to better understand how latitude affects space weathering on the moon, according to the Chinese Academy of Sciences. (CGTN)

Mars News and Information at MarsDaily.com
Lunar Dreams and more 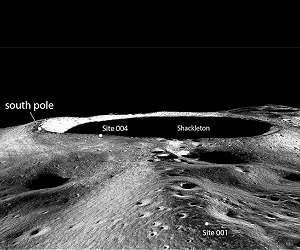 Where to land on the Moon?


It was 1972 when the last humans landed on the Moon. The Apollo programme was discontinued thereafter. But interest in the Moon has been rekindled. With China having landed a robot – and raised its flag – on the far side of the Moon in 2020, NASA is planning for its Artemis programme to land in the lunar south pole region, probably between 2025 and 2028. Astronauts will then concentrate their exploration in this area.